You are here: Home / Library / The Price of the Haircut: Stories 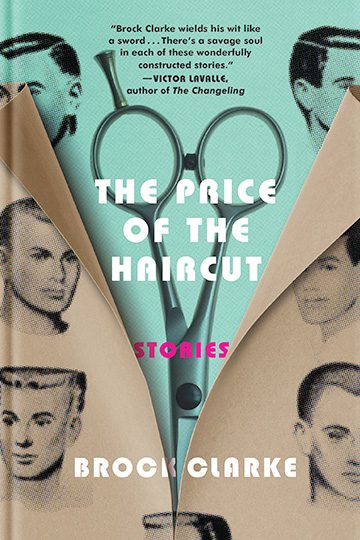 From an acclaimed and original writer comes a new collection of stories bursting with absurdist plot twists and laced with trenchant wit. Brock Clarke, author of An Arsonist’s Guide to Writers’ Homes in New England and Exley, among other novels, now offers up bite-sized morsels of his trademark social satire that will have readers laughing, and perhaps shifting uncomfortably in their seats.

The title story delivers a cringingly biting dissection of racial attitudes in contemporary America, and Clarke also turns his eagle eye to subjects like PTSD, the fate of child actors, and, most especially, marital discord in stories like “Considering Lizzie Borden, Her Axe, My Wife” and “The Misunderstandings.” In “The Pity Palace,” a masterful study in self-absorption and self-delusion, a reclusive husband in Florence, Italy, who believes his wife has left him for a famous novelist, sells tickets to tourists anxious to meet someone more miserable than they.

It’s a distinctly Clarkean world, in which readers find themselves reflected back with the distortion of funhouse mirrors—and swept up on a wild ride of heart-wrenching insight and self-discovery.

“The characters that populate these acerbic stories have made a fine art out of self-delusion and self-sabotage—and their various unspoolings are equal parts blistering and riveting. The Price of the Haircut is Brock Clarke at his satiric best.”
—Laura van den Berg, author of Find Me

“Brock Clarke is such a funny writer you might make the mistake of thinking these stories are pure, light fun. You’d be wrong about that. The Price of the Haircut kept catching me by surprise with the depth of its insights and the depths Clarke was willing to plumb. There’s a savage soul in each of these wonderfully constructed tales. Brock Clarke wields his wit like a sword.”
—Victor LaValle, author of The Ballad of Black Tom and The Changeling

“Brock Clarke’s superb stories—exemplars of tragicomic voice and escalation—move ever forward on the tracks of his characters’ rigorous but self-delusional logic. What a pleasure it is to read an artist who is in such complete control of talent and technique.”
—Chris Bachelder, author of The Throwback Special

“Another literary high-wire performance by a novelist who is establishing himself as a unique voice in contemporary fiction.”
—Kirkus Reviews (starred and later chosen as one of the year’s best)