You are here: Home / Library / Jim Crow, Literature, and the Legacy of Sutton E. Griggs 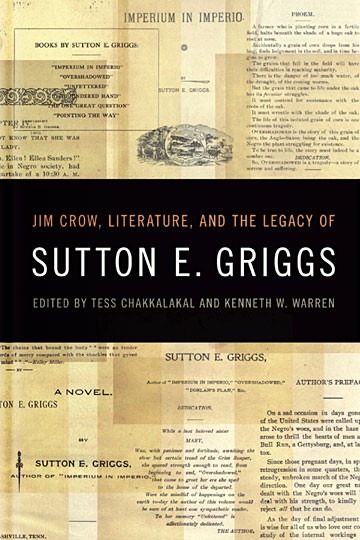 Imperium in Imperio (1899) was the first black novel to countenance openly the possibility of organized black violence against Jim Crow segregation. Its author, a Baptist minister and newspaper editor from Texas, Sutton E. Griggs (1872–1933), would go on to publish four more novels; establish his own publishing company, one of the first secular publishing houses owned and operated by an African American in the United States; and help to found the American Baptist Theological Seminary in Tennessee. Alongside W. E. B. Du Bois and Booker T. Washington, Griggs was a key political and literary voice for black education and political rights and against Jim Crow.

Jim Crow, Literature, and the Legacy of Sutton E. Griggs examines the wide scope of Griggs’s influence on African American literature and politics at the turn of the twentieth century. Contributors engage Griggs’s five novels and his numerous works of nonfiction, as well as his publishing and religious careers. By taking up Griggs’s work, these essays open up a new historical perspective on African American literature and the terms that continue to shape American political thought and culture.

“This rich and remarkably diverse collection of new scholarship on Sutton E. Griggs restores to view an important literary voice, at once analytically sharp and imaginatively daring, in the battle against Jim Crow.”
—Eric J. Sundquist, Andrew W. Mellon Professor of the Humanities, Johns Hopkins University

“This essay collection on the perennially underappreciated African American writer of five novels and numerous tracts reveals a Sutton Griggs that no single monograph has yet shown: not the definitive figure but a political chameleon, placed in a striking series of rigorously researched historical contexts, from the border culture of Texas, where he lived, to the emerging race-citizenship complex of the United States as an imperial nation. The Jim Crow era itself emerges throughout the essays as more of a paradox than we’ve known, both the nadir of African American history and the heyday of the race novel, if not of African American literature as a whole.”
—Susan Gillman, author of Blood Talk: American Race Melodrama and the Culture of the Occult