You are here: Home / Library / Embracing Dissent: Political Violence and Party Development in the United States 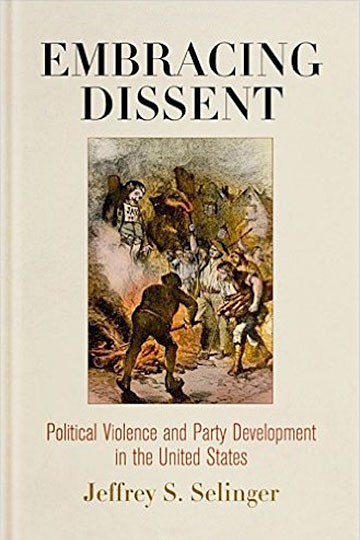 While the American founders fully expected parties to form in a free society, they were far less certain that opposing parties would peacefully transfer power from one to another. Party formation presented a confounding problem for the new republic: party rivalries could not be prevented, but they might, nonetheless, catalyze civil disorder or fracture the union of the states. The status of political parties has come a long way in American society and politics, however, and today American democracy is inconceivable without them.

How did party competition become a regular and “normal” feature of the American political landscape? Why did American political leaders, who viewed such rivalry as a harbinger of the new republic’s destruction, come to terms with party opposition? Embracing Dissent tells this story of political transformation, making the case that the status of party gained ground as the notion that party competition might instigate class violence, secession, or civil war, receded. From the American founding and the appearance of the Jacksonian Democratic party, to Lincoln’s management of party politics during the Civil War, Jeffrey S. Selinger presents a careful reconsideration of American political development.

Embracing Dissent also provides historical perspective on today’s polarized political condition. Too often, pundits exaggerate the significance of partisan differences and minimize the depth of political consensus that permeates American politics. Political observers casually use expressions like “party conflict,” forgetting, as the famed political scientist Giovanni Sartori noted, that public consensus on fundamental legal and constitutional norms makes party competition “something less than conflict, as we endlessly if often too late rediscover whenever we are confronted with the reality of a people shooting at each other.” Embracing Dissent reminds readers of the long history of Americans “shooting at each other,” and describes the political events that disarmed them.

“This fine book draws attention to an overlooked problem in the study of the historical development of political parties; namely, that the nature of parties turns in part on the nature of political divisions. Jeffrey Selinger argues persuasively that parties took on greater legitimacy as they came to be perceived as less of a threat of domestic violence or division—indeed, that developing the capacity to stop the threat of partisan violence was itself a developmental project.”
—Daniel Klinghard, College of the Holy Cross